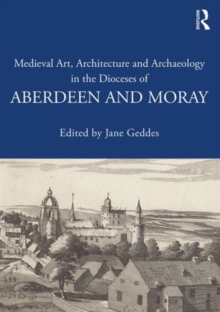 Medieval art, architecture and archaeology in the dioceses of Aberdeen and Moray

Part of the The British Archaeological Association conference transactions series

Exploring the medieval heritage of Aberdeenshire and Moray, the essays in this volume contain insights and recent work presented at the British Archaeological Association Conference of 2014, based at Aberdeen University.

The opening, historical chapters establish the political, economic and administrative context of the region, looking at both the secular and religious worlds and include an examination of Elgin Cathedral and the bishops' palaces.

The discoveries at the excavations of the kirk of St Nicholas, which have revealed the early origins of religious life in Aberdeen city, are summarized and subsequent papers consider the role of patronage.

Patronage is explored in terms of architecture, the dramas of the Reformation and its aftermath highlighted through essentially humble parish churches, assailed by turbulent events and personalities.

The collegiate church at Cullen, particularly its tomb sculpture, provides an unusually detailed view of the spiritual and dynastic needs of its patrons.

The decoration of spectacular ceilings, both carved and painted, at St Machar's Cathedral, Provost Skene's House and Crathes Castle, are surveyed through the eyes of their patrons and the viewers below.

Saints and religious devotion feature in the last four chapters, focusing on the carved wooden panels from Fetteresso, which display both piety and a rare glimpse of Scottish medieval carnal humour, the illuminated manuscripts from Arbuthnott, the Aberdeen Breviary and Historia Gentis Scotorum. The medieval artistic culture of north-east Scotland is both battered by time and relatively little known.

With discerning interpretation, this volume shows that much high-quality material still survives, while the lavish illustrations restore some glamour to this lost medieval world.