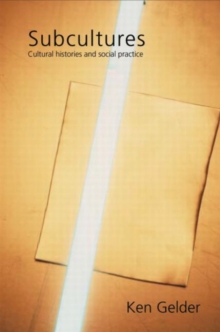 This book presents a cultural history of subcultures, covering a remarkable range of subcultural forms and practices.

Subcultures are always in some way non-conforming or dissenting.

They are social - with their own shared conventions, values, rituals, and so on - but they can also seem 'immersed' or self-absorbed.

This book identifies six key ways in which subcultures have generally been understood: through their often negative relation to work: idle, parasitical, hedonistic, criminal; their negative or ambivalent relation to class; their association with territory - the 'street', the 'hood', the club - rather than property; their movement away from home into non-domestic forms of 'belonging'; their ties to excess and exaggeration (as opposed to restraint and moderation); and, their refusal of the banalities of ordinary life and in particular, of massification. "Subcultures" looks at the way these features find expression across many different subcultural groups: from the Ranters to the riot grrrls, from taxi dancers to drag queens and kings, from bebop to hip hop, from dandies to punk, from hobos to leatherfolk, and from hippies and bohemians to digital pirates and virtual communities.

It argues that subcultural identity is primarily a matter of narrative and narration, which means that its focus is literary as well as sociological.

It also argues for the idea of a "subcultural geography": that subcultures inhabit places in particular ways, their investment in them being as much imaginary as real and, in some cases, strikingly utopian.