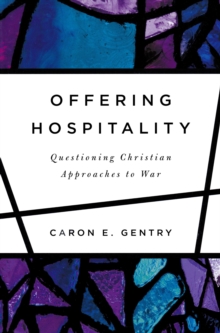 Gentry reflects on the predominant strands of American political theology-Christian realism, pacifism, and the just war tradition-and argues that Christian political theologies on war remain, for the most part, inward-looking and resistant to criticism from opposing viewpoints. In light of the new problems that require choices about the use of force-genocide, terrorism, and failed states, to name just a few-a rethinking of the conventional arguments about just war and pacifism is timely and important.

Gentry's insightful perspective marries contemporary feminist and critical thought to prevailing theories, such as Christian realism represented in the work of Reinhold Niebuhr and the pacifist tradition of Stanley Hauerwas.

She contends that the practice of hospitality, incorporated into the jus ad bellum criterion of last resort, would lead to a "better peace." Gentry's critique of Christian realism, pacifism, and the just war tradition through an engagement with feminism is unique, and her treatment of failed states as a concrete security issue is practical.

By asking multiple audiences-theologians, feminists, postmodern scholars, and International Relations experts-to grant legitimacy and credibility to each other's perspectives, she contributes to a reinvigorated dialogue.