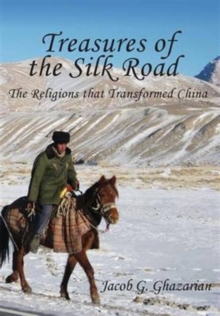 Treasures of the Silk Road : The Religions That Transformed China

Our millennium-old romance with the tales of the ancient Silk Road continues to fascinate us all and shows no signs of abating.

Like a phoenix repeatedly rising from its ashes, the memories of the road's ordeals and achievements constantly turn our attention to images of heavily laden camel caravans treading their way amidst a dusty twilight of churning haze.

In our minds we bring to life the harmonic footsteps of the camel trains that reduce the sinking sun in the far horizon into a pale reddish disc.

Yet like erect sentries, the surrounding majestic snow-capped mountains beckoned the entrepreneurial merchants on foot to riches hidden deep in valleys accessed only through high and perilous passes.

These courageous men were the catalyst not only for the trade of their earthly goods but also of the less tangible commodities that promised the receptive ears a paradise in heaven. The author's engaging description of how the world's greatest religions permeated and changed ancient China is augmented by colour photographs taken during the author's personal travels.

Here the ancient history of humanity's greatest missionary enterprises is dissected for the reader and highlighted by some of the unknown treasures of the Silk Road.

The geographic importance of many ancient areas now occupied by Kazakhstan, Uzbekistan, Turkmenistan, Kyrgyzstan, Tajikistan, Afghanistan, India and Pakistan are also discussed in the unfolding of this history.

With concise narratives the author assesses the legacies of the men of the Silk Road who brought the beliefs of Buddhism, Christianity and Islam into China. Jacob G. Ghazarian, D.Phil. is an independent scholar associated with Wolfson College, University of Oxford where he has conducted his research for more than a decade on the impact of religions upon the socio-political fabric of regional indigenous populations.

He is a Fellow of the Royal Asiatic Society of Great Britain and Ireland.