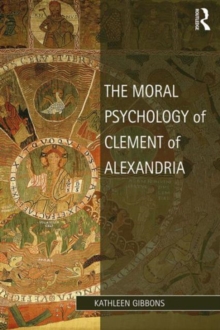 The moral psychology of Clement of Alexandria : mosaic philosophy

In The Moral Psychology of Clement of Alexandria, Kathleen Gibbons proposes a new approach to Clement's moral philosophy and explores how his construction of Christianity's relationship with Jewishness informed, and was informed by, his philosophical project.

In explaining what he took to be the cosmological, metaphysical, and ethical implications of the doctrine that the supreme God is a lawgiver, Clement provided the theoretical justifications for his views on a range of issues that included martyrdom, sexual asceticism, the status of the law of Moses, and the relationship between divine providence and human autonomy.

By contextualizing Clement's discussions of volition against wider Greco-Roman debates about self-determination, it becomes possible to reinterpret the invocation of "free will" in early Christian heresiological discourse as part of a larger dispute about what human autonomy requires.