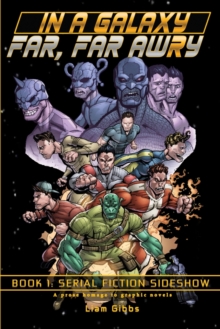 The galaxy's most unhinged lunatic has an extinction-level death ray...and an itchy trigger finger.

With a death ray at his disposal, he's taking over the galaxy and putting everyone on a four-day notice. And if they don't like it...

...he'll nuke them instead.

The galaxy's only hope is Major Legion, Asinine's ex-best friend. Tortured over his failure to stop Asinine from murdering their mutual buddy long ago, Legion must overcome inner demons to stop this army of thousands from exterminating everyone.

But Asinine's got a big surprise for an old friend...

There's nothing more dangerous than a psychopath who controls all crime.

In a Galaxy Far, Far AwRy is an even mix of Hitchhiker's Guide to the Galaxy, Spaceballs, Avengers, and awkward eye contact from across crowded rooms.

And it's low sodium, if it comes to that.