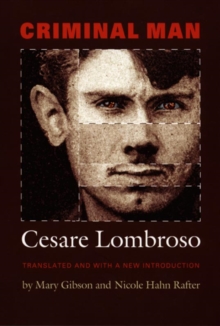 Cesare Lombroso is widely considered the founder of criminology.

His theory of the "born" criminal dominated European and American thinking about the causes of criminal behaviour during the late nineteenth century and early twentieth.

This volume offers English-language readers the first critical, scholarly translation of Lombroso's "Criminal Man", one of the most famous criminological treatises ever written.

The text laid the groundwork for all subsequent biological theories of crime, including contemporary genetic explanations. Originally published in 1876, "Criminal Man" went through five editions during Lombroso's lifetime.

In each edition, Lombroso expanded on his ideas about innate criminality and refined his method for categorizing criminal behaviour.

In this new translation, Mary Gibson and Nicole Hahn Rafter bring together for the first time excerpts from all five editions in order to represent the development of Lombroso's thought and his positivistic approach to understanding criminal behaviour.In "Criminal Man", Lombroso used modern Darwinian evolutionary theories to "prove" the inferiority of criminals to "honest" people, of women to men, and of blacks to whites, thereby re-enforcing the prevailing politics of sexual and racial hierarchy.

He was particularly interested in the physical attributes of criminals - the size of their skulls, the shape of their noses - but he also studied the criminals' various forms self-expression, such as letters, graffiti, drawings, and tattoos.

This volume includes more than 40 of Lombroso's illustrations of the criminal body along with several photographs of his personal collection.

Designed to be useful for scholars and to introduce students to Lombroso's thought, the volume also includes an extensive introduction, notes, appendices, a glossary, and an index.