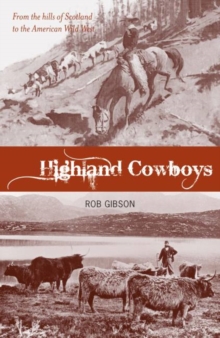 At home on the range : do real cowboys wear stetsons or kilts?

From droving to driving, heilan coos to long horns, Highland Cowboys explores the links between the two cattle cultures of Scotland and America through music, song, dance, and folklore.

The vast number of Scots who emigrated to North America, whether through forcible eviction during the Highland Clearances or voluntarily in the hope of a better life, has been well documented.

With them they took their culture, their language, their music and their skills.

Cattle droving in Scotland was an established profession from the 16th century, and many such migrants took cowboy jobs in the American West.

The medium of music paints a vivid picture of their social and personal lives, and describes a mutual exchange as music crossed and re-crossed the Atlantic creating strong links between the old culture and the new.

This unique exploration of the cowboy culture sheds new light on the everyday life of the cattle communities.

The title has been replaced. To check if this specific edition is still available please contact Customer Care +44(0)1482 384660 or schools.services@brownsbfs.co.uk, otherwise please click 9781913025243 to take you to the new version.