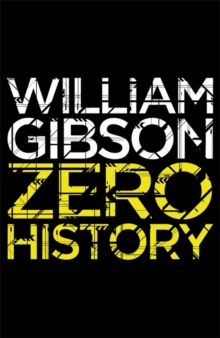 Part of the Blue Ant series

Hollis knows nothing about fashion - which, curiously, is why Bigend hired her.

Soon, though, it's clear that Bigend's interest in underground labels might have sinister applications.

Powerful parties, who'll do anything to get into this territory, are showing their hand. And Hollis, as Bigend's representative, is about to find herself in the crossfire. Set among London's dark and tangled streets, Zero History is a brilliant thriller about the hidden webs and patterns that underlie the new now. 'Smart and seductive, inventive. Gibson is having tremendous fun' Independent'An ideas-swarm, coated with a hipster glaze . . . to explore the everyday weirdness of the twenty-first century world' Herald'Gibson's writing is thrillingly tight' Scarlett Thomas, New York Times Book ReviewWilliam Gibson is a prophet and a satirist, a black comedian and an outstanding architect of cool.

He has since written six further novels, moving gradually away from science fiction and futuristic work, instead writing about the strange contemporary world we inhabit.

His most recent novels include Patter Recognition, Spook Country and Zero History, his non-fiction collection.

Distrust That Particular Flavor, compiles assorted writings and journalism from across his career.