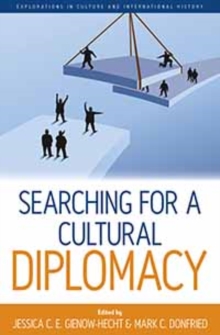 Searching for a cultural diplomacy

Part of the Explorations in Culture and International History series

Recent studies on the meaning of cultural diplomacy in the twentieth century often focus on the United States and the Cold War, based on the premise that cultural diplomacy was a key instrument of foreign policy in the nation's effort to contain the Soviet Union.

As a result, the term "cultural diplomacy" has become one-dimensional, linked to political manipulation and subordination and relegated to the margin of diplomatic interactions.

This volume explores the significance of cultural diplomacy in regions other than the United States or "western" countries, that is, regions that have been neglected by scholars so far-Eastern Europe, Asia, and the Middle East.

By examining cultural diplomacy in these regions, the contributors show that the function of information and exchange programs differs considerably from area to area depending on historical circumstances and, even more importantly, on the cultural mindsets of the individuals involved.