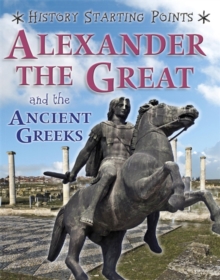 Alexander the Great and the ancient Greeks

Born in Macedonia in 356 BCE, Alexander the Great is known as one of the greatest rulers of all time.

He led his armies to success after success, building a mighty empire that stretched across three continents and covered over three million square kilometres, before dying tragically young at the age of just 33.

Suitable for readers aged 8+, each book in History Starting Points explores the life and times of a key historical figure, from Alfred the Great to Hatshepsut.

It tells the story of the subject's life, using vital primary source material, such as what contemporary people wrote about the figure.

Alongside this, each book builds up a vivid picture of the historical era in which the person lived, from Anglo-Saxon Britain to the civilisations of ancient Greece and Egypt.

Included throughout are cross-curricular links to other key subject areas such as literacy, science or geography, and the text is supported by cartoon, myths and legends and fun craft projects to make.