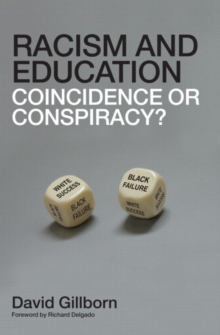 Racism and education : coincidence or conspiracy?

Education policy is not designed to eliminate race inequality but to sustain it at manageable levels.

This is the inescapable conclusion of the first major study of the English education system using `critical race theory'. David Gillborn has been described as Britain's `most influential race theorist in education'.

In this book he dissects the role of racism across the education system; from national policies to school-level decisions about discipline and academic selection. Race inequality is not accidental and things are not getting better.

Despite occasional `good news' stories about fluctuations in statistics, the reality is that race inequality is so deeply entrenched that it is effectively `locked in' as a permanent feature of the system. Built on a foundation of compelling evidence, from national statistics to studies of classroom life, this book shows how race inequality is shaped and legitimized across the system.

The study explores a series of key issues including:the impact of the `War on Terror' and how policy privileges the interests of white peoplehow assessment systems produce race inequalityexposes the `gifted and talented' programme as a form of eugenic thinking based on discredited and racist myths about intelligence and abilitydocuments the Stephen Lawrence case revealing how policy makers have betrayed earlier commitments to race equalityshows how `model minorities' are created and used to counter anti-racismhow education policy is implicated in the defence of white power. Conspiracy? Racism & Education takes critical antiracist analyses to a new level and represents a fundamental challenge to current assumptions in the field.

With a preface by Richard Delgado, one of the founders of critical race theory.