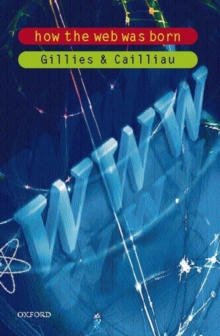 How the Web was born : the story of the World Wide Web

By: Cailliau, Robert (Head of the Web office at CERN),  Gillies, James (CERN)

Part of the Popular Science series

In 1994 a computer program called the Mosaic browser transformed the Internet from an academic tool into a telecommunications revolution.

Now a household name, the World Wide Web is part of the modern communications landscape with tens of thousands of servers providing information to millions of users.

Few people, however, realize that the Web was born at CERN, the European Laboratory for Particle Physics, in Geneva, and that it was invented by an Englishman, Tim Berners-Lee.

This new book, published in the Popular Science list in Oxford Paperbacks, tells how the idea for the Web came about at CERN, how it was developed, and how it was eventually handed over for free for the rest of the world to use.

This is the first book-length account of the Web's development and it includes interview material with the key players in the story.