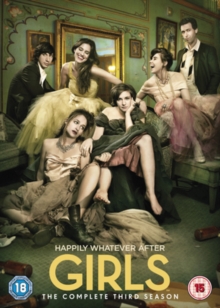 All 12 episodes from the third season of the Golden Globe-winning HBO comedy drama following a group of 20-something women in New York.

The show's creator Lena Dunham stars as Hannah, a struggling writer living in Brooklyn who finds herself broke when her parents decide to cut off their financial support.

As she attempts to deal with the trials of life including problems at work and in her relationship with Adam (Adam Driver), her friends Marnie (Allison Williams), Jessa (Jemima Kirke) and Shoshanna (Zosia Mamet) each battle with their own issues.

In this season, Hannah receives some disappointing news regarding her book deal and has a fall out with Adam's sarcastic sister Caroline (Gaby Hoffmann); Jessa attempts to get over her drug addiction in rehab; Marnie struggles to cope after breaking up with her ex for the second time; and Shoshanna and Ray (Alex Karpovsky) go their separate ways.