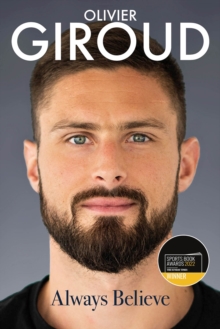 Join him on a remarkable journey, from playing for a small club in southern France to achieving top-flight glory there and in England, before lifting the World Cup with the French national team.

Giroud shot to prominence in 2011/12 as the top scorer in France's Ligue 1, netting 21 goals to help Montpellier to their first-ever top-flight title.

After signing for Arsenal in 2012, he rewarded the Gunners with 73 goals in 180 games and helped them to three FA Cup wins.

He is also the French national team's second-highest scorer.

Now at Chelsea, Giroud is still hungry for success. But what about the sacrifices he's made along the way?

The pressures of being under the spotlight and having to cope with a constant stream of criticism and questions around his selection for the national side?

Usually a private person, Giroud holds nothing back as he shares all the highs and lows of a stellar career at the game's top level in this tell-all book.