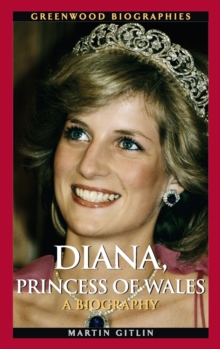 Diana, Princess of Wales : a biography

Part of the Greenwood Biographies series

Long before her tragic death, Diana, Princess of Wales was a beloved modern icon, relatable to the general public in a way that transcended the barrier between royal and commoner.

As a member of the royal family in an age of mass media, her fairy-tale wedding to, and painful divorce from, Prince Charles was played out on the world stage.

Later, her humanitarian work for the Red Cross, her campaigns against landmines, and her work with the sick, especially AIDS victims, added a compassionate element to the royal family in the eyes of the world-and the world, ten years later, still hasn't gotten enough of Lady Di.

This objective, accessible volume explores Diana's fascinating life, including her aristocratic upbringing, her whirlwind engagement to Prince Charles, her rocky marriage, her post-divorce status as global humanitarian icon, the media's frenzied treatment of her death, and her charitable legacy, including her sons' coming-of-age and their attempts to honor her memory. A timeline of key events, vibrant images, and a bibliography of print and nonprint sources supplement the work.