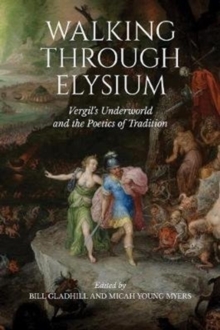 Walking through Elysium : Vergil's Underworld and the Poetics of Tradition

Walking through Elysium stresses the subtle and intricate ways writers across time and space wove Vergil's underworld in Aeneid 6 into their works.

These allusions operate on many levels, from the literary and political to the religious and spiritual.

Aeneid 6 reshaped prior philosophical, religious, and poetic traditions of underworld descents, while offering a universalizing account of the spiritual that could accommodate prior as well as emerging religious and philosophical systems.

Vergil's underworld became an archetype, a model flexible enough to be employed across genres, and periods, and among differing cultural and religious contexts. The essays in this volume speak to Vergil's incorporation of and influence on literary representations of underworlds, souls, afterlives, prophecies, journeys, and spaces, from sacred and profane to wild and civilized, tracing the impact of Vergil's underworld on authors such as Ovid, Seneca, Statius, Augustine, and Shelley, from Pagan and Christian traditions through Romantic and Spiritualist readings.

Walking through Elysium asserts the deep and lasting influence of Vergil's underworld from the moment of its publication to the present day.