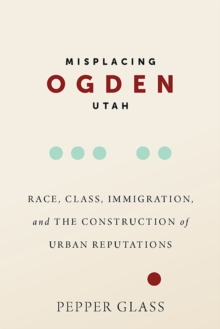 How do we draw the lines between "good" and "bad" neighborhoods?

How do we know 'ghettos'? This book questions the widely held assumption that divisions between urban areas are reflections of varying amounts of crime, deprivation, and other social, cultural, and economic problems.

Using Ogden, Utah, as a case study, Pepper Glass argues that urban reputations are 'moral frontiers' that uphold and create divides between who is a good and respectable - or a bad and vilified - member of a community. Ogden, a working-class city with a history of racial and immigrant diversity, has long held a reputation among Utahns as a 'sin city' in the middle of an entrenched religious culture.

Glass blends ethnographic research with historical accounts, census reports and other secondary sources to provide insight into Ogden's reputation, past and present.

Capturing residents' perceptions of an entire city, as opposed to only some of its neighborhoods, and exploring the regional contexts shaping these views, is rare among urban researchers.

Glass's unique approach suggests we can better confront urban problems by rethinking assumptions about place and promoting interventions that break down boundaries.