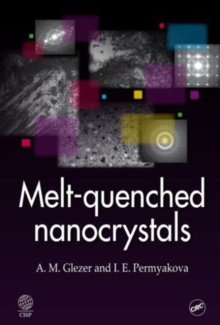 Melt quenching-the method of quenching from the liquid state-provides new opportunities for producing advanced materials with a unique combination of properties.

In the process of melt quenching, attainment of critical cooling rates can produce specific structural states of the material.

Nanocrystalline materials produced by melt quenching are classified as nanomaterials not only by their nanoscale structural elements but also by the effects these elements have on the properties of the material. The result of 30 years of research, Melt-Quenched Nanocrystals presents a detailed and systematic analysis of the nanostructured state formed in the process of melt quenching and subsequent thermal and deformation effects.

It covers the metallurgical and mechanical properties of nanomaterials, focusing particularly on properties derived from nanocrystals and their agglomeration.