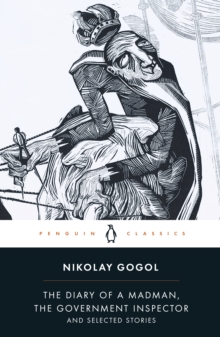 Diary of a madman, The government inspector and selected stories

Author, dramatist and satirist, Nikolay Gogol (1809-1852) deeply influenced later Russian literature with his powerful depictions of a society dominated by petty bureaucracy and base corruption.

This volume includes both his most admired short fiction and his most famous drama.

A biting and frequently hilarious political satire, "The Government Inspector" has been popular since its first performance and was regarded by Nabokov as the greatest Russian play every written.

The stories gathered here, meanwhile, range from comic to tragic and describe the isolated lives of low-ranking clerks, lunatics and swindlers.

They include "Diary of a Madman", an amusing but disturbing exploration of insanity; "Nevsky Prospect", a depiction of an artist besotted with a prostitute; and "The Overcoat", a moving consideration of poverty that powerfully influenced Dostoevsky and later Russian literature.