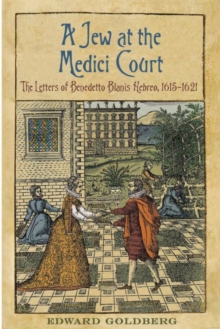 Edward Goldberg shares his sensational discovery of the largest body of surviving correspondence from any Jew in Early Modern Europe.

Over the course of six years, Benedetto Blanis - a scholar and entrepreneur in the Florentine Ghetto - wrote nearly 200 letters to his princely patron Don Giovanni dei Medici.

For the first time, these letters are available in a definitive critical edition - with full transcriptions in the original Italian, English language summaries, and explanatory notes.

This book is a companion volume to Jews and Magic in Medici Florence, in which Goldberg narrates Blanis's startling rise and fall.

Readers can now take a step closer and hear Blanis's compelling story in his own words - tracing his fraught relations with Jews and Christians, his desperate (and often illegal) business schemes, his disastrous strategies for advancement at the Medici Court, and his pursuit of arcane knowledge, including astrology, alchemy, and Kabbalah.