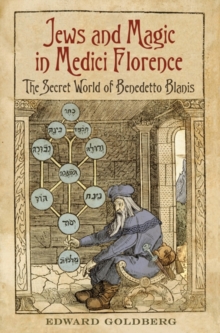 Jews and Magic in Medici Florence : The Secret World of Benedetto Blanis

In the seventeenth century, Florence was the splendid capital of the Medici Grand Dukedom of Tuscany.

Meanwhile, the Jews in its tiny Ghetto struggled to earn a living by any possible means, especially loan-sharking, rag-picking and second-hand dealing.

They were viewed as an uncanny people with rare supernatural powers, and Benedetto Blanis-a businessman and aspiring scholar from a distinguished Ghetto dynasty-sought to parlay his alleged mastery of astrology, alchemy and Kabbalah into a grand position at the Medici Court.

He won the patronage of Don Giovanni dei Medici, a scion of the ruling family, and for six tumultuous years their lives were inextricably linked. Edward Goldberg reveals the dramas of daily life behind the scenes in the Pitti Palace and in the narrow byways of the Florentine Ghetto, using thousands of new documents from the Medici Granducal Archive.

He shows that truth-especially historical truth-can be stranger than fiction, when viewed through the eyes of the people most immediately involved.