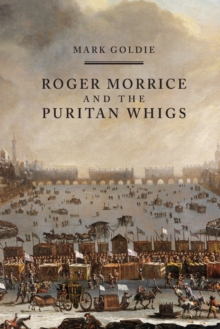 'An exceptionally significant monograph, and without doubt one of the most important to appear in the field of Restoration history in the last twenty years.

Mark Goldie has done more than anyone else to illuminate the political and religious assumptions of late seventeenth-century Englishmen.' Dr Grant Tapsell, University of Oxford. Roger Morrice and the Puritan Whigs explains a movement, illuminates the world of its emblematic representative, and explores one of the most remarkable documents of the seventeenth century. Morrice's Entring Book was supremely well-informed, passionately committed, and relentlessly opinionated.

Chronicling the years 1677 to 1691, nearly a million words in length, it is the fullest surviving record of the tumultuous final years of the Stuart regime, from the Popish Plot and Exclusion Crisis to the Glorious Revolution. Morrice was a Puritan clergyman turned confidential reporter for leading Whig politicians, a barometer of opinion, for whom reliable information was vital for public action.

It offers a story of disillusion and diminuendo, of struggles for survival in the face of intolerance, and of self-understanding among those who hoped to transform England through 'Godly rule'. Yet the book also tells a countervailing story of revitalized and transformed Puritanism.

Puritans worked through parliament, the royal court, and the households of gentry, merchants, lawyers, and clergy.

Setting out to galvanize civil society, they mobilized public opinion, organized electorates, and deployed the arts of journalism, influence, and persuasion. This book has been adapted, with a new substantial introduction and updated bibliography, from the first volume of the Entring Book of Roger Morrice. Mark Goldie is Professor of Intellectual History at the University of Cambridge and a Fellow of Churchill College.