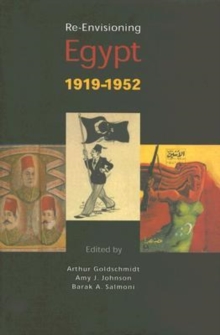 It demonstrates that many of the domestic and regional sociopolitical and cultural changes credited to the 1952 revolutionaries actually began in the decades before the July coup.

Arguing against the predominant view of the pre-revolutionary era in Egypt as one of creeping decay, the volume restores understandings of the 1919-1952 years as integral to modern nation-state formation and social transformation.

The book's contributors show that Egypt's real revolutions were long-term processes emerging over several decades prior to 1952.

The leaders of the 1952 coup capitalized on these developments, yet earlier changes in Egyptian society fundamentally facilitated their actions and policies.

This volume includes revisionist discussion of domestic political issues and foreign policy; the military, education, social reform, and class; as well as popular media, art, and literature. By introducing new approaches to these under-appreciated categories of analysis through exploration of untapped sources and by re-examining the political context of the time, Re-Envisioning Egypt, 1919-1952 proposes innovative methodologies for understanding this crucial period in Egyptian history, casting these years as fundamental to the country's twentieth-century trajectory.