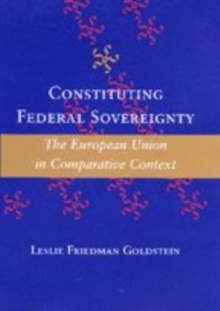 Part of the The Johns Hopkins Series in Constitutional Thought series

Starting from the premise that the system of independent, sovereign, territorial states, which was the subject of political science and international relations studies in the 20th century, has entered a transition toward something new, political scientist Leslie F.

Goldstein examines the development of the European Union by blending comparative and historical institutionalist approaches.

She argues that the most useful framework for understanding the kinds of "supra-state" formations that are increasingly apparent in the beginning of the third millennium is comparative analysis of the formative epochs of federations of the past that formed voluntarily from previously independent states.Goldstein identifies three significant predecessors to today's European Union: the Dutch Union of the 17th century, the United States of America from the 1787 Constitution to the Civil War, and the first half-century of the modern Swiss federation, beginning in 1848.

She examines the processes by which federalization took place, what made for its success, and what contributed to its problems.

She explains why resistance to federal authority, although similar in kind, varied significantly in degree in the cases examined, and she explores the crucial roles played by such factors as sovereignty-honouring elements within the institutional structure of the federation, the circumstances of its formation (revolt against distant empire versus aftermath of war among member states), and notably, the internal culture of respect for the rule of law in the member states.