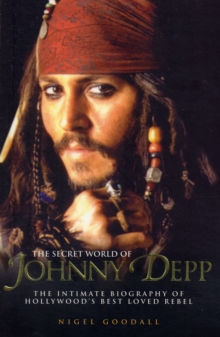 The secret world of Johnny Depp : the intimate biography of Hollywood's best-loved rebel

Not only is Johnny Depp a huge star, but his unconventional choice of movie roles has made him a fascinating and mysterious character.

With appearances in both children and adult films such as "Charlie and the Chocolate Factory" and "The Libertine", Depp has a mass market cross- generational appeal.

From his debut in "Nightmare on Elm Street" in 1984 through to his flamboyant turn as the voice of Victor Van Dort in "Corpse Bride", Depp has successfully carved a niche for himself as a serious, somewhat dark, idiosyncratic performer, consistently selecting roles that surprised critics and audiences alike.

Currently, Depp is living with French singer-actress Vanessa Paradis, with whom he has two children: Lily-Rose Melody, born in 1999 and Jack, born in 2002.

He has also had a wild parallel career as a rock musician with involvement in the elite party scene in LA - Depp was in the Viper Room club the night River Phoneix overdosed. This definitive biography charts every aspect of the charismatic actor's life.