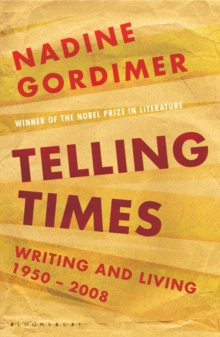 Telling Times collects together all her non-fiction for the first time, spanning more than half a century, from the twilight of colonial rule in South Africa, to the long, brutal fight to overthrow South Africa's apartheid regime and to her leadership role over the last 20 years in confronting the dangers of AIDS, globalisation, and ethnic violence.

The range of this book is staggering, from Gordimer's first piece in The New Yorker in 1954, in which she autobiographically traces her emergence as a brilliant, young writer in a racist country, to her pioneering role in recognising the greatest African and European writers of her generation, to her truly, courageous stance in supporting Nelson Mandela and other members of the ANC during their years of imprisonment.

Given that Gordimer will never write an autobiography, Telling Times is an important document of twentieth-century social and political history, told through the voice of one of its greatest literary figures.