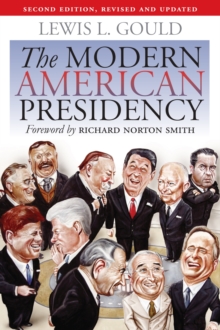 When the first edition of this book appeared in 2003, it was chosen as a Main Selection of both the Book-of-the-Month Club and History Book Club and quickly became the standard work on the modern American presidency - from William McKinley through William Jefferson Clinton.

In that original edition, Lewis L. Gould argued that, while the president may be the most powerful man in the world, most presidents have fallen well short of the daunting challenges that confronted them while in office.

During George W. Bush's two administrations, as Gould discusses in a substantial new chapter, those challenges grew in scope and ferocity, encompassing two intractable wars, natural disaster on an inconceivable scale, and a near-meltdown of the national and global economies.

Unfortunately, Gould argues, President Bush was woefully unprepared for those challenges, failed spectacularly as a leader, and ultimately lost the public's trust.

This new edition, like the first, offers a lively interpretive synthesis filled with intriguing insights into the presidency's evolution during America's rise to global prominence.

Gould traces the decline of the party system, the increasing importance of the media and its role in creating the president-as-celebrity, and the growth of the White House staff and executive bureaucracy.

He also shows us a succession of chief executives who increasingly have known less and less about the business of governing the country, observing that most would have had a better historical reputation if they had contented themselves with a single term.

Gould's sharply critical new chapter on George W. Bush's presidency notes how he and his associates extended the troubling trends of continuous campaigning, media manipulation, celebrity politics, and inattention to governance so characteristic of the modern presidential office.

Gould also amplifies his commentary on the Clinton presidency and lays out the treacherous terrain that President Obama must now traverse.

This book remains a must read for everyone who cares about the future of our nation and the presidents who lead it.