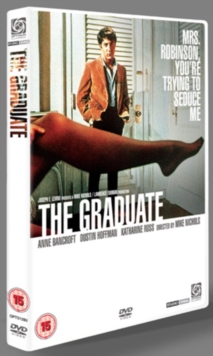 After graduating from college, Ben Braddock (Hoffman) returns to his wealthy parents' South Californian home unsure of what he wants to do next.

Feeling pressurised to get on with his life, the young Braddock escapes into an aimless affair with Mrs Robinson (Bancroft), an older, married woman and friend of the family.

The pair meet regularly, with neither expecting anything serious from the relationship, but this seemingly simple situation becomes complicated when Ben meets and begins dating Elaine (Ross) - Mrs Robinson's daughter.

Featuring a score written by Paul Simon and performed by Simon and Garfunkel, the film was nominated for six Oscars and won for Best Director.