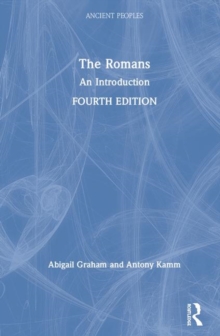 The Romans : an introduction

Part of the Peoples of the Ancient World series

The Romans: An Introduction is a concise, readable and comprehensive survey of the Roman world, which explores 1,200 years of political, military and cultural history alongside religion, social pressures, literature, art and architecture.

The fourth edition incorporates a number of new features and evolving fields:A new chapter on provinces, provincial administration and acculturation in the Roman Empire.

An extended chapter on Christianity and Rome's legacy with new case studies in the reception of Roman culture.

An extended chapter on Roman society and daily life, including recent scholarship on gender and race in the ancient world.

Integrated use of text and material evidence which is designed to develop analytical skills in critical source assessment.

Thoroughly updated and redeveloped, this new edition of The Romans will continue to serve as the definitive introduction to the life, history and culture of the Roman world, from its foundation to its significance to later civilizations.