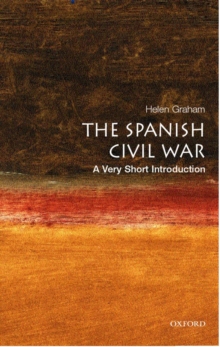 This Very Short Introduction offers a powerfully-written explanation of the war's complex origins and course, and explores its impact on a personal and international scale.

It also provides an ethical reflection on the war in the context of Europe's tumultuous twentieth century, highlighting why it has inspired some of the greatest writers of our time, and how it continues to resonate today in Britain, continental Europe, and beyond.

Throughout the book, the focus is on the war as an arena of social change where ideas about culture were forged or resisted, and in which both Spaniards and non-Spaniards participated alike.

These were conflicts that during the Second World War would stretch from Franco's regime, which envisaged itself as part of the Nazi new order, to Europe and beyond.

Accordingly, this book examines Spanish participation in European resistance movements during World War II and also the ongoing civil war waged politically, economically, judicially and culturally inside Spain by Francoism after its military victory in 1939.

History writing itself became a battleground and the book charts the Franco regime's attempt to appropriate the past.It also indicates its ultimate failure - as evident in new writings on the war and, above all, in the return of Republican memory now occurring in Spain during the opening years of the twenty-first century.