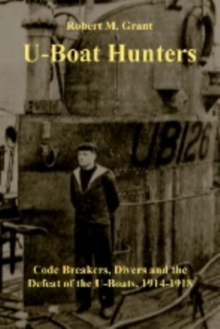 The author explains how the code breakers at the Admiralty's Room 40 were able to break into the German naval codes during World War I.

This was primarily achieved by the collection of cipher information from many differing sources.

Crashed Zeppelins provided some insight, but wrecked U-boats could offer much more.

Royal Navy divers investigated U-boat wrecks around Britain and Ireland and were able to retrieve some extremely valuable intelligence.

Aside from giving Room 40 total insight into the workings of U-boat operations, this new intelligence could offer the chance to hunt down and destroy U-boats at sea.

This secret war has never been told, but by digging through the radio interception records, telegrams and the records of the Admiralty Salvage Department, an incredible story emerges.

Robert Grant has made a lifelong study of U-boat operations in the Great War.

His research began in 1928 and led him to archives worldwide over the following decades, as more documents were uncovered.

He still continues to unearth new material on this fascinating subject.

He is considered to be one of the world's leading experts on the first U-boat campaign.