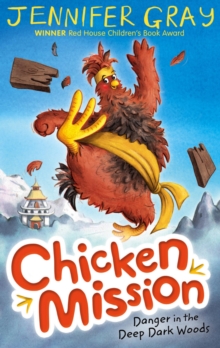 By: Gray, Jennifer,  George, Hannah(Illustrated by)

Part of the Chicken Mission series

One day Amy receives a summons to the Kung Foo School for Poultry in Tibet where she learns she is to become part of an elite chicken squad whose mission is to defeat their evil predators.

It sounds like a dream come true for Amy but she's disappointed to find that fellow squad members, Ruth and Boo, don't seem to want to make friends.

Ruth is too busy inventing things and Boo has problems of her own.The chickens travel to Chicken HQ to meet their mentor, Professor Rooster.

When their first mission flops it is Amy who persuades the others that they should stick together to restore Professor Rooster's faith in them.

Through a series of egg-citing adventures and hilarious mishaps the three young chickens learn the value of friendship and teamwork.

But will they be ready for their biggest mission so far - to save the chicks of St Eggbert's Primary School from the jaws of their mortal enemy, Thadeus E Fox?