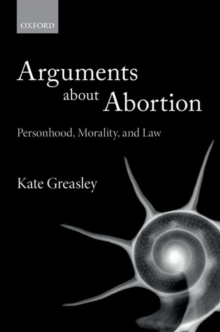 Does the morality of abortion depend on the moral status of the human fetus?

Must the law of abortion presume an answer to the question of when personhood begins?

Can a law which permits late abortion but not infanticide be morally justified?

These are just some of the questions this book sets out to address.

With an extended analysis of the moral and legal status of abortion, Kate Greasley offers an alternative account to the reputable arguments of Ronald Dworkin and Judith Jarvis Thomson and instead brings the philosophical notion of 'personhood' to the foreground of this debate.

Structured in three parts, the book will (I) consider the relevance of prenatal personhood for the moral and legal evaluation of abortion; (II) trace the key features of the conventional debate about when personhood begins and explore the most prominent issues in abortion ethics literature: the human equality problem and the difference between abortion and infanticide; and (III) examine abortion law and regulation as well as the differing attitudes to selective abortion.

The book concludes witha snapshot into the current controversy surrounding the scope of the right to conscientiously object to participation in abortion provision.