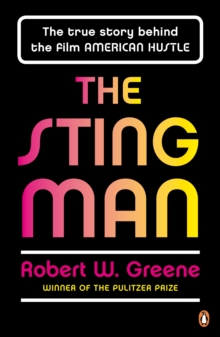 The sting man : inside Abscam

The Sting Man: The True Story Behind the Film AMERICAN HUSTLEThe inspiration behind the film American Hustle, directed by David O'Russell (Silver Linings Playbook, The Fighter) and starring Christian Bale, Bradley Cooper, Jennifer Lawrence and Amy AdamsHow did a Bronx hustler nearly bring down the US government?From hustling on the streets of the Bronx to selling bogus businesses and sham investments around the world, Mel Weinberg netted millions of dollars.

So legendary were his skills that in the late 1970s he was recruited by the FBI to combat art thieves and counterfeiters.

But the trail quickly led to even bigger targets. His legendary sting operation, Abscam, caught eight corrupt congressmen and senators.

The scandal shook America to the core. In The Sting Man, Pulitzer Prize-winning author Robert W.

Greene presents not only a thrilling account of the rise of the FBI's international con mastermind, but a vivid dissection of the underbelly of the American Dream.

Can you really con an honest man?This astonishing true story will be loved by fans of Argo and Catch Me If You Can. 'Absorbing and hilarious... reads like good fiction'Washington PostRobert W. Greene was a veteran reporter for more than twenty-seven years, a Senior Staff Investigator for the New York City Anti-Crime Committee and an investigator for the U.S.

Senate. As a reporter for Newsday, he headed investigative teams that twice won the Pulitzer Prize gold medal.

He was also president of the Investigative Reporters and Editors Group.