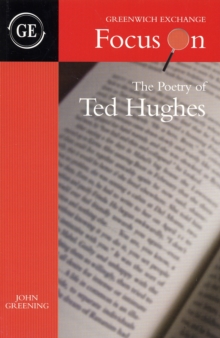 Focus on the poetry of Ted Hughes

Part of the Focus on series

In the controversy surrounding his marriage to Sylvia Plath, we should not forget Ted Hughes' monumental status in the latter decades of the 20th Century.

From his early glances at nature's savagery, through the shadow-years of 'Crow', into a middle way full of birds, flowers, insects, farm-life and fishing, to the sudden, unexpected panorama of 'Birthday Letters', Hughes never ceased to astonish his readers.

John Greening, author of the Greenwich Exchange Guides to Poets of the First World War and W.B.

Yeats (writers much loved by Ted Hughes), offers a straightforward guide through the labyrinth of his 'Collected Poems', while making an assessment of the poet's reputation nearly a decade after his death.