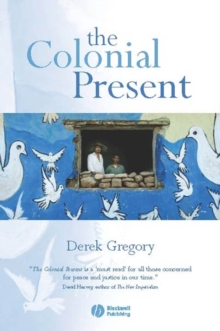 In this powerful and passionate critique of the "war on terror" in Afghanistan, Palestine, and Iraq, Derek Gregory traces the long history of British and American involvements in the Middle East.

He argues that the attacks on the World Trade Center and the Pentagon on September 11 activated a series of political and cultural responses that mapped a profoundly colonial perimeter of power.

The Colonial Present traces the connections between political, military, and economic power - the grand strategies of geopolitics - and the spatial stories told by the lives of ordinary people.

It also shows the intimate connections between events in Afghanistan, Palestine, and Iraq.

Packed with empirical detail, and shot through with arresting arguments, The Colonial Present is indispensable reading for anyone seeking to understand a world riven by a war on terror that is also a war of terror.