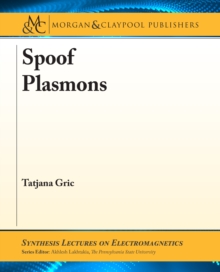 Part of the Synthesis Lectures on Electromagnetics series

The fundamental optical excitations that are confined to a metal/dielectric interface are the surface plasmon polaritons (SPPs), as described by Ritchie.

SPPs can be referred to as electromagnetic excitations existing at an interface between two media, of which at least one is conducting.

Investigating spoof plasmons in a semiconductor is becoming an increasingly active area of research.

The field of plasmonics deals with the application of surface and interface plasmons.

It is an area in which surface plasmon-based circuits merge the fields of photonics and electronics at the nanoscale.

Recently, an idea of engineering surface plasmons at lower frequencies was suggested.

It was concluded in that the existence of holes in the structure can lower the frequency of existing surface plasmons.

Thus, by cutting holes or grooves in metal surfaces, it is possible to take concepts such as highly localized waveguiding and superfocusing to lower frequencies, particularly to the THz regime, where plasmonics could enable near-field imaging and biosensing with unprecedented sensitivity.

It is the main reason to use the terminology &quotespoof surface plasmons&quote for the bound surface waves propagating along the perforated structures.

The book's title Spoof Plasmons demonstrates that it is devoted to exhibiting the current state of the art of the dynamic and vibrant field of photonic metamaterials reaching across various disciplines, suggesting exciting applications in chemistry, material science, biology, medicine, and engineering.