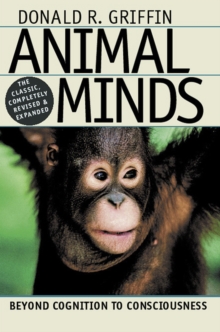 Animal Minds : Beyond Cognition to Consciousness Rev and Exp

This text takes the reader on a guided tour of scientific research concerning animal mentality.

Are animals consciously aware of anything, or are they merely living machines incapable of conscious thoughts or emotions?

How can we tell? Such questions have fascinated the author, Donald Griffin, for decades, and his years spent at the forefront of research in animal cognition make him one of the leading behavioural ecologists of the 20th century.

Using examples, ranging from chimpanzees to dolphins to birds and bees, Griffin demonstrates how communication between animals can serve as a "window" into what animals think and feel.

He even shows how the reader can learn when there is no verbal communication from the animal, instead look at the actions the animal is taking, and how they respond to their surrounding and adapt or die.

Griffin also considers the up-and-coming research on animal consciousness, its pros and cons, and explores the philosophical and ethical implications of the research.