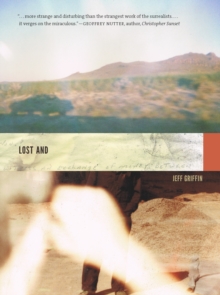 Ever since he was a child sitting in the back of his parents' car, Jeff Griffin has been taking explorative journeys into the desert.

In 2007, as an art student, he started wandering the back roads of the Mojave Desert with the purpose of looking for a place to reflect in the harshly beautiful surroundings.

What he found were widely scattered postmodern ruins-abandoned trailers and campers and improvised structures-whose vanished occupants had left behind, in their trash, an archaeological record of astonishing richness and poignancy.Lost and is both a chronicle of Griffin's obsessive journeying and a portal into a world of dispossessed people and enduring desires.

Part documentary history, part literary adventure, part mystical detective story, Griffin's immersion in extremity has yielded wrenching annals of the modes and manners in which lost people inscribe their psychic, sexual, religious, and economic yearnings.At the core of the work is a collection of poems, mostly handwritten and composed without pretense to literary sophistication, that give direct expression to the abiding impulse to tap language's transformative potential.

Assembled with deep regard for the dignity of its collective group of anonymous authors, Lost and is a book of profound conceptual originality-an engrossing, shocking, and tender work of art that strives to awaken voices from the wilderness of the inexpressible.