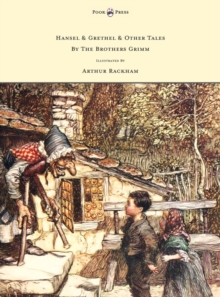 By: Grimm, Brothers,  Rackham, Arthur(Illustrated by)

This book 'Hansel & Gretel & Other Tales' contains the stories written by the Grimm Brothers along with Rackham's imaginative, obscure and beautiful illustrations.

Many of the earliest children's books, particularly those dating back to the 1900s and before, are now extremely scarce and increasingly expensive.

Pook Press are working to republish these classic works in affordable, high quality, colour editions, using the original text and artwork so these works can delight another generation of children.

They are arguably best known for their collection Children's and Household Tales published in 1812, which later became known as Grimm's Fairy Tales, and contained some of today's most celebrated fairy stories, such as Cinderella, Rumpelstiltskin and Hansel and Gretel.

About the Illustrator: Arthur Rackham (1867-1939) was one of the premier illustrators of the early 20th Century.

He illustrated many books, the first of which was published in 1893.

His humour, romance and soul made him the leading illustrator of the early twentieth century and his work is to be found in versions of almost every classic from Hansel and Gretel to The Tempest, from The Pied Piper to Peer Gynt.

Characteristic of his work are gloomy forests of sinuous trees, nubile fairy maidens, and unsightly ogres and trolls.

Throughout his career he developed a very individual style that was to influence a whole generation of children, artists and other illustrators.

His haunting humour and dreamlike romance adds to the enchantment and fantasy of children's literature.