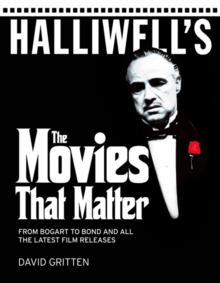 Halliwell's the movies that matter : from Bogart to Bond and all the latest film releases

A major reworking of Halliwell's, the definitive brand in movie publishing, featuring the Editor's personal selection of 3,000 essential films - from the 1930s classics to the modern-day blockbusters.

Includes over 350 new releases in the UK in the last year, plus stand-alone feature articles on new talent, film genres and movie news for 2008. Long established as the first and last word in movie-going information, this new-look guide promises to be as cutting edge as it is wide-ranging. And as always, it's a promise that Halliwell's guarantees to deliver. These are the movies that have created a benchmark - the 3,000 films that stand out through more than seven decades of movie making.

From the black and white classics of the pre-War years, through the golden period of the seventies and eighties to the genre-breaking films of the 21st Century, these are the movies that matter. This beautifully designed, perennially entertaining and indispensable guide includes plot synopses and evaluations, plus reader-friendly icons denoting films suitable for family viewing, Academy Award winners and nominees, and lists of best films by genre. Brand new to Halliwell's, editor David Gritten will introduce a series of features on topical issues, ranging from actor and actress profiles, the rise of the family movie and video-on-demand through to the glitz and glamour of film festivals, what's hot in the current film industry and a look ahead to what the forthcoming cinematic year will bring.