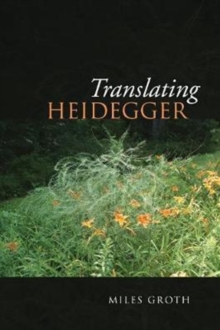 Part of the New studies in phenomenology and hermeneutics series

Despite Martin Heidegger's influence on twentieth-century philosophy, understanding his way of thinking is difficult if one relies solely on the English translations of his work.

Since Gilbert Ryle misjudged his work in a 1929 review of Sein und Zeit, Heidegger's philosophy has remained an enigma to many scholars who cannot read the original German texts.

In Translating Heidegger, Groth points to mistranslations as the root cause of misunderstanding Heidegger.

Translators have not achieved clarity regarding Heidegger's fundamental words, an understanding of which is crucial to gaining access to his thought.

Having been mistranslated from the ancient Greek into Latin and then into modern European languages, Heidegger's philosophies have largely been obscured for two millennia.