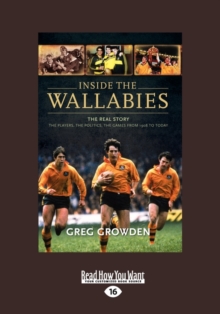 Inside the Wallabies : The Real Story, the Players, the Politics and the Games from 1908 to Today

He was also the first captain of a strange, disparate bunch who called themselves the Wallabies.

One hundred years on, the Wallabies of today are as outlandish, cocksure and eccentric as their forebears.

It is the spirit and soul of this group of remarkable sportsmen that is captured in Inside the Wallabies.

This is the real story of the Wallabies from their first games in 1908 to today.

It is about the players, the coaches, the politics and the games.

It is about the soaring highs of World Cup success and the years when they truly deserved the moniker of Woeful Wallabies.

It is about going on Tour, about enmities and friendships, about moments of national elation and player shame. As fast paced as a Mark Ella backline play, as solid as Phil Kearns' front row and as controversial as a Robbie Deans selection, Inside the Wallabies is a fascinating, passionate and insightful history of the world of the Australian Rugby Union.

It is a book no rugby fan can be without.