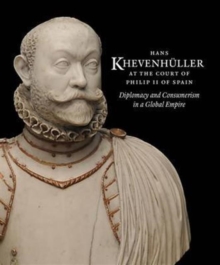 Hans Khevenhuller at the Court of Philip II of Spain : diplomacy & consumerism in a global empire

The quest for the exotic became an obsession for Renaissance princes and collectors, as markets in Lisbon and Seville were flooded by the mid 16th century with luxury goods, commodities, Ming porcelain, exotica, textiles, clothes, dress accessories and strange animals imported from Portuguese Asia, the Far East, Africa and the Americas.

Shopping on a grand scale became a priority, especially for the Central European courts of the Habsburg, whose collections, known as Kunstkammers, represented their symbolic hegemony over a world empire, its peoples, flora and fauna. One man in particular played a formidable part in the expansion of these Habsburg Kunstkammers - Hans Khevenhuller, imperial ambassador in Spain.

As diplomat, he assumed diverse roles at the Spanish court - politician, advisor, cultural broker, artistic agent, patron of the arts and collector.

Appointed inthe early 1570s resident ambassador at the court of Philip II, he was a keen observer of the Spanish court, meticulously recording peoples, events and happenings.

Crossing ceremonial boundaries, Khevenhuller became a trusted friend and counselor of Philip II and his royal family, gaining admission into their private lives.

His diary and largely unpublished correspondence are remarkable for the insights,commentaries and information he provides about contemporaries and their courts, fellow diplomats and Habsburg patrons - Maximilian II, Rudolf II, Ferdinand II of Tyrol, Karl II of Inner Austria and his wife, Maria of Bavaria.

A true Renaissance man, with cultivated tastes and a discerning eye, Khevenhuller was single-handedly responsible for the acquisition of live animals, exotica, luxury goods, jewelry, precious stones, spices and drugs, including seeds and plants from overseas.

In Spain, Venice, Vienna and Prague he sponsored and patronized painters, architects, goldsmiths, jewelers and artisans. Marking the 410th anniversary of Khevenhuller's death, this book will examine Khevenhuller's own art collection and Kunstkammer created for his residence in Madrid and his country estate at Arganda.

A foreword by Martin Malcolm Elbl introduces the diplomatic world of Khevenhuller.

Other contributions by Vanessa de Cruz Medina and Jorge Fernandez-Santos Ortiz-Iribas will focus on Khevenhuller's ties with the family of the imperial Ambassador Adam von Dietrichstein in Spain and Austria, and the reconstruction of Khevenhuller's library in his Madrid residence.

Correspondence, documents and inventories located in archives in Geneva, Simancas (Valladolid), Lisbon, Madrid, Vienna, Karnten, Paris and Brno are highlighted in this book and in the appendices. Archival research was supported by a generous collaborative reserach grant given by the Getty Foundation (Los Angeles) from 2008 to 2013.