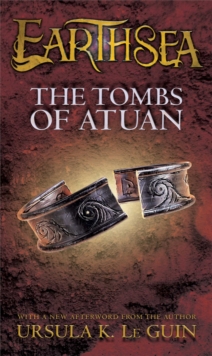 The Tombs of Atuan

The Tombs of Atuan

Part of the Earthsea Cycle series

In this second novel in the Earthsea series, Tenar is chosen as high priestess to the ancient and nameless Powers of the Earth, and everything is taken from herhome, family, possessions, even her name. She is now known only as Arha, the Eaten One, and guards the shadowy, labyrinthine Tombs of Atuan.

Then a wizard, Ged Sparrowhawk, comes to steal the Tombs greatest hidden treasure, the Ring of Erreth-Akbe. Tenars duty is to protect the Ring, but Ged possesses the light of magic and tales of a world that Tenar has never known. Will Tenar risk everything to escape from the darkness that has become her domain?

With millions of copies sold worldwide, Ursula K. Le Guins Earthsea Cycle has earned a treasured place on the shelves of fantasy lovers everywhere, alongside the works of such beloved authors as J.R.R. Tolkien and C.S. Lewis.