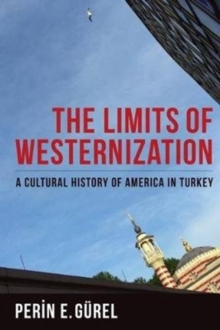 The limits of westernization : a cultural history of America in Turkey

Part of the Columbia Studies in International and Global History series

How did Turkey's citizens come to hold such opposing views simultaneously?

In The Limits of Westernization, Perin E. Gurel explains this unique split and its echoes in contemporary U.S.-Turkey relations.

Using Turkish and English sources, Gurel maps the reaction of Turks to the rise of the United States as a world-ordering power in the twentieth century.

As Turkey transitioned from an empire to a nation-state, the country's ruling elite projected "westernization" as a necessary and desirable force but also feared its cultural damage.

Turkish stock figures and figures of speech represented America both as a good model for selective westernization and as a dangerous source of degeneration.

At the same time, U.S. policy makers imagined Turkey from within their own civilization templates, first as the main figure of Oriental barbarism (i.e., "the terrible Turk"), then, during the Cold War, as good pupils of modernization theory.

As the Cold War transitioned to the War on Terror, Turks rebelled against the new U.S.-made trope of the "moderate Muslim." Local artifacts of westernization-folk culture crossed with American cultural exports-and alternate projections of modernity became tinder for both Turkish anti-Americanism and resistance to state-led modernization projects.

The Limits of Westernization analyzes the complex local uses of "the West" to explain how the United States could become both the best and the worst in the Turkish political imagination.

Gurel traces how ideas about westernization and America have influenced national history writing and policy making, as well as everyday affects and identities.

Foregrounding shifting tropes about and from Turkey-a regional power that continues to dominate American visions for the "modernization" of the Middle East-Gurel also illuminates the transnational development of powerful political tropes, from "the Terrible Turk" to "the Islamic Terrorist."