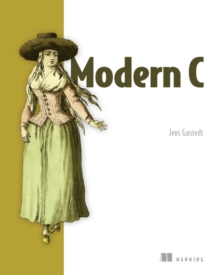 If you think "Modern" and "C" don't belong in the same sentence, think again.

The C standards committee actively reviews and extends the language, with updated published C standards as recently as 2018.

In Modern C, author Jens Gustedt teaches you the skills and features you need to write relevant programs in this tried-and-true language, including Linux and Windows, device drivers, web servers and browsers, smartphones, and much more! Modern C teaches you to take your C programming skills to new heights, whether you're just starting out with C or have more extensive experience. Organized by level, this comprehensive guide lets you jump in where it suits you best while still reaping the maximum benefits. Key Features Fundamentals of C programming Operators and functions Performance techniques C library functions For more than four decades, C has proved its usefulness and staying power for everything from massive systems for mainframes, satellites, and internet browsers to tiny embedded systems in vending machines, credit card readers, and alarm clocks.

Currently, he's conducting the Modular C project, which has given rise to libraries such as arbogast and EiLck.