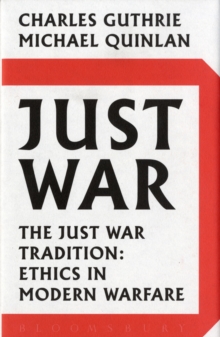 Every society and every period of history has had to face the reality of war.

War inevitably yields situations in which the normal ethical rules of society have to be overridden.

The Just War tradition has evolved over the centuries as a careful endeavour to impose moral discipline and humanity on resort to war and in its waging, and the tradition deserves our attention now as much as ever.

Just War traces the origin and nature of the tradition from its roots in Christian thinking and provides a clear summary of its principles, which are accessible to all beliefs.

As the circumstances and necessities of war have changed over time, so too have the practical interpretations of the tradition.

Drawing examples from Kosovo, Afghanistan and the wars in Iraq, Charles Guthrie and Michael Quinlan look at the key concepts in relation to modern armed conflict.

The tradition sets rational limits and respects the adversary's humanity amid the chaos of war, and provides systematic questions which governments and armed forces must ask themselves before they engage in war. This short but powerful book is a timely re-examination of its tenets and their relevance in the twenty-first century, setting out the case for a workable and credible moral framework for modern war before, while and after it is waged.