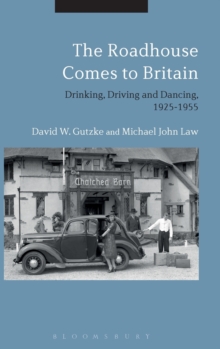 This is the first book to examine the cultural phenomenon of the roadhouse in mid 20th-century Britain and its impact on British leisure.

The term 'roadhouse' was used in varied ways in the 1930s, from small roadside tearooms to enormous establishments on the outskirts of major cities.

These roadhouses were an important component in the transformation of leisure in the 1930s and beyond, reflecting the increased levels of social and physical mobility brought about by new technologies, suburbanisation and the influence of American culture. Roadhouses attracted wealthy Londoners excited by the prospect of a high-speed run into the countryside.

During the day, they offered family activities such as tennis, archery, horse riding and swimming.

At night, they provided all the fun of the West End with dancing, classy restaurants, cabaret, swimsuit parades and dance demonstrations, subverting the licensing laws to provide all-night drinking.

Rumours abounded of prostitution and transgressive behaviour in the car park.

Roadhouses formed part of an imaginary America in suburban Britain that was promoted by the popularity of American movies, music and fiction, providing a pastiche of the American country club.

While much work has been done on the Soho nightclubs of the 1930s, the roadhouse has been largely ignored.

Michael John Law and David Gutzke fill this gap in the literature by providing a comprehensive analysis of the roadhouse's cultural meaning, demonstrating how its Americanisation was interpreted for British consumers.

This original and engaging study will be fascinating reading for all scholars of 20th-century British cultural history.